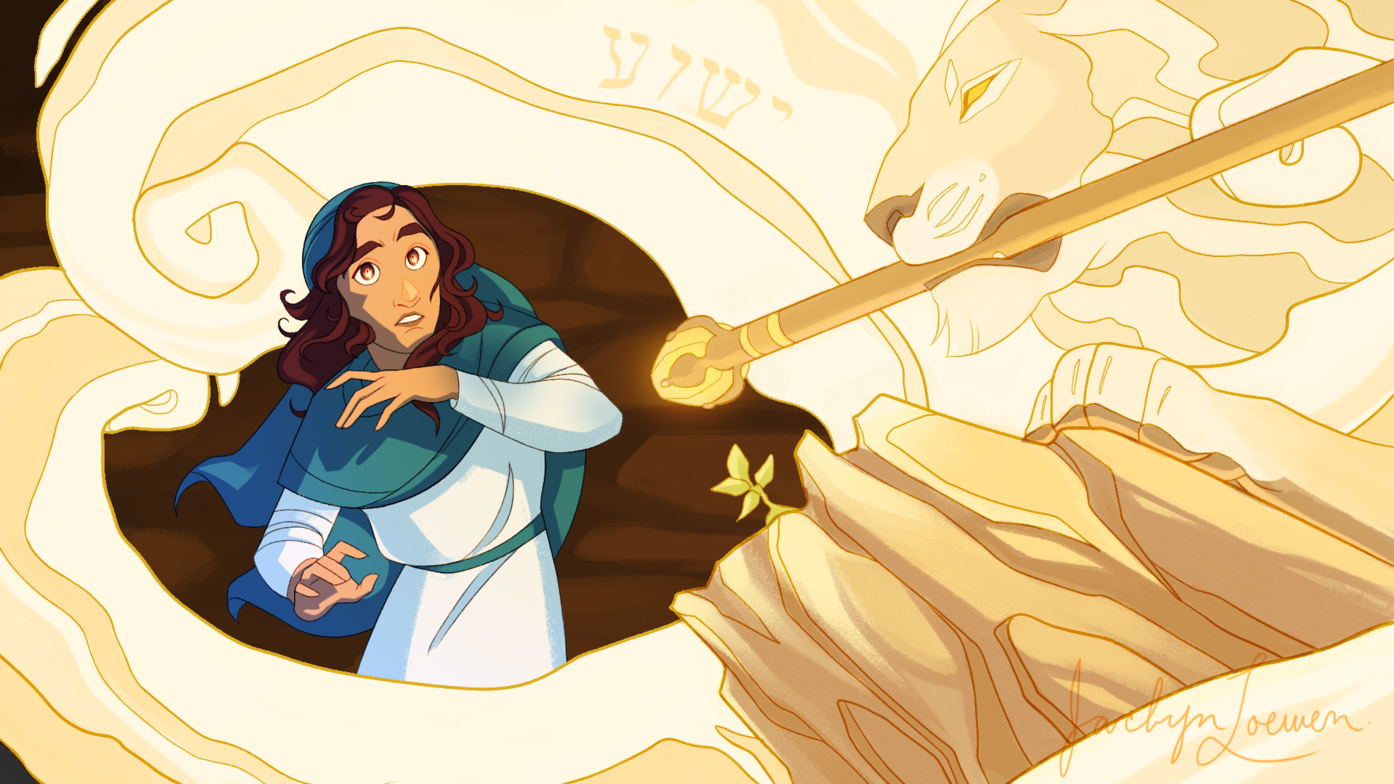 For this fourth and final week of preparation, we look at the visit of the angel Gabriel to the virgin Mary.

The central focus of this piece is two-fold: we first see Mary, both afraid and in awe of the favour God has lavished upon her in choosing her to bear His promised Messiah. And what a faith-filled response! To be found betrothed, unmarried, yet pregnant, would have brought great ostracisation and even the threat of death against her. But Mary understood that she was blessed in God's hand and in His plan, and bowed to His wisdom in thanksgiving despite these frightening things.

We then see the angel. Rather than depict what Gabriel might have looked like in a literal way, I chose to centre in on the imagery that springs from the message he brings to Mary in Luke 1:31-33,

“You will conceive and give birth to a son, and you are to call him Jesus. He will be great and will be called the Son of the Most High. The Lord God will give him the throne of his father David, and he will reign over Jacob’s descendants forever; his kingdom will never end.”

First, is the name of Jesus, written in Aramaic in the swirl of Gabriel’s light; Yeshua, “deliverer, saviour, rescuer", for that is who our Christ is to us.

Second, the lion, representative of the prophecy Jacob gave to his son Judah in Genesis 49,

“You are a lion’s cub, Judah; you return from the prey, my son. Like a lion he crouches and lies down, like a lioness – who dares to rouse him? The sceptre will not depart from Judah, nor the ruler’s staff from between his feet, until he to whom it belongs shall come and the obedience of the nations shall be his.”

And last, the shoot growing from the stump, representative of the words spoken by the prophet Isaiah in Isaiah 11:1, “a shoot will come up from the stump of Jesse; from his roots, a Branch will bear fruit”.

Gabriel’s words proclaim the fulfilment of these prophecies, and we anticipate the day Christ returns to bring these promises to their fullest fulfilment. That day in Revelation 5:5, when John is told to, “Weep no more; behold, the Lion of the tribe of Judah, the Root of David, has conquered, so that he can open the scroll and its seven seals”. We reflect on this great love God poured into our world in sending His Son to live a perfect life and die on our behalf, and in this, we who have come to know and love Him wonder in awe with Mary at these great and marvellous things He has done for His lost and wandering people.

Feb 28
It's not what you expect